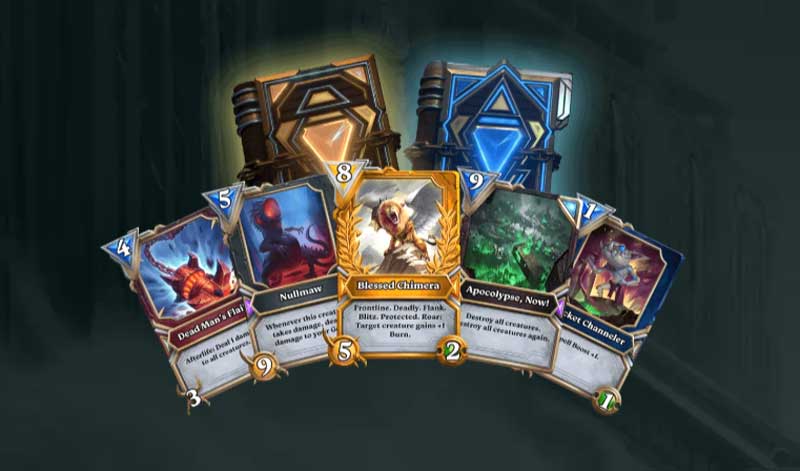 Before reading the full description of the game, our team suggests that you sit back and enjoy the game trailer.

An important factor in sorting out any startup is the availability of investor funds. If the project sees potential for success, it will be much easier to raise money from the powers that be than to sell another tetris. So we conclude – if there is investment from large companies or entrepreneurs, that’s at least a nice bonus when evaluating a startup.

Gods Unchained is a collectible card game, similar in mechanics to Heathstone as much as possible.

If you run through the home page, you’ll find some interesting facts:

The team promises to hold the GU Championship in the first quarter of 2019, the prize pool is declared at 10% of the funds raised, and is already guaranteed $408,022 (the mid-December figure is $391,056) . The only thing to add here is the fact that Hearthstone has guaranteed a prize pool of $1,000,000. Don’t forget, Hearthstone is a game from Blizzard, launched in 2014 and has over a hundred million users. Hmmm, and here’s some nonce, and already a prize pool of four hundred thousand dollars. Here we should call our readers once again, it could be a hoax, don’t let the pretty numbers fool you. But we really want to believe that GU will be a real game, and not a carefully planned scam. So far it seems to be the coolest thing in the game, just imagine, the beta version of the game appears in late November, and in just 3-4 months we can fight for a part of the enormous inventory.

The most expensive card sold was Hyperion, which was bought for $60,000 on the date of purchase. By the way, it is the second most expensive asset on the crypto market. It took you just 15 seconds to read about the possibility of cheating in the crypto-sphere, and you’ve already fallen for a tidy sum again, and your eyes are running in anticipation of easy profits. Stop and think about it!

Try to find a confirmation of this information on the Internet. Of course, no one can deny the fact that this beautiful bytecode was bought for $60,000, because the transaction is in the blockchain, but the purchase could have been made by a person closest to the development team. This creates a haip around the project and attracts buyers. Always think over each offer, read somewhere in the Internet, with your head. However, we want to assure you, the transactions in the Ethereum network for the purchase of cards is already prohibitive for the organizers to be profitable to scroll such a scam for their money, well, let’s not forget about the famous investors. The official GU website page gives some scrappy information about the auction, about Hyperion in particular, we will have to dig in the blockchain for the details. Here is the transaction with the purchase of Hyperion.

In each match, participants can choose which hero to play as. The main character of GU is a God, you could call it a race or faction by analogy with other games. Each deity has three regular abilities (God Powers) and one ultima, the “crown” (Ultimate Power).

If the ultima can be used only once per game, one of the main three abilities can be used more than once. Developers have introduced such a feature of choice of abilities before each game, so that in a single game players can apply different approaches in the construction of the deck, and strengthen their tactics depending on the expected opponent’s cards. All of these steps will eventually lead to a better strategy and variability in the game.

For example, when playing against a god of war whose abilities and skins are focused on attack power and unit health, you can use the ability to defend, thus compensating for the difference in attack power of your units compared to the opponent’s army. When fighting with the God of Death, you should use a more aggressive style of play, in order to increase your chances of winning.
From all of this we conclude that GU is a game of “brains”, in which every move, starting with the choice of the god’s regular abilities, must be part of your plan.

Players choose from 6 Deities: God of Light – Thaerial, God of Death – Malissus, God of War – Auros, God of the Forces of Nature – Aeona, God of Magic – Elyrian, God of Trickery and Lies – Ludia.

To start the game, the player will need a deck of thirty cards. You can get them for free, every week after the start there will be a process of adding/removing some cards. It is impossible to lose possession of the cards in battle. Each match is 1 on 1, and the mission is to destroy the opponent’s Deity. To make a move, the player will expend mana to activate the ability of the cards. At the beginning of each battle, participants receive a bit of mana to perform the first moves, as the game resource of magic power is gradually replenished.

As mentioned above, you don’t have to buy sets of cards right away to start playing, the game is built on a free-to-pay model, which will give everyone a chance to try their hand. Whether there will be free cards competitors with purchased decks time will tell. However, we must be realistic and accept the fact that buying specific cards with unique, rare abilities on the market will have a huge effect in building a more balanced and strategically thought-out deck.

You know, although the lack of information about the team – a strong minus in the karma of the project, but after reading the above information and surfing the net about this project, Kryptogamers ran to buy their first set of cards, the effect of excitement takes us on the wings ahead of the train of sanity.

Let’s break down the paid card sets. There are currently only four types of sets (boosters):

The cost of card sets in Gods Unchained
In each set you can find the last mythic (Mythic) card Prometheus, remember, the second card of this class Hyperion already sold out.

Each pack will only contain cards from the Genesis set.

You can make purchases using theMetamask browser extension or if you have a hardware wallet. The only inconvenient aspect of the purchase was the lack of flexibility in choosing the number of sets. Now it is available to buy 1, 6, 18, 50 or 100 packs in one payment. If you want to buy a different amount from these values, you will have to spend a little more time.

It should be noted that shining cards only brings aesthetic satisfaction and also hides the potential for value growth for collecting, there are no physical improvements to the mechanics of the game. A glowing and a non-glowing card during the game will have exactly the same effect.

The developers have added a fascinating point to increase the demand for weaker cards. Suddenly you are so lucky that you collected five identical cards, in which case the option is available for players to swap five “repeats” for one card with the same ability, but improving its shining by 1 rank. For example, swap five rare Field Martyr cards of gold color for one Field Martyr of diamond color. There will definitely be card swapping services on the market, most likely first implemented through OTC markets (such as here), and that will help increase the number of shiny cards in players’ decks.

Take a look at the probabilities of regular, racial, epic, and legendary cards when you buy a set:

The odds of getting common, rare, epic, and legendary cards in Gods Unchained.
And here you can see the probability of getting cards with radiance:

The odds of getting simple, shadow, gold, and diamond cards in Gods Unchained.
As you might have guessed, a Diamond Legendary is going to be a tough sell, and its price is going to sky-high if the game finds its place in the sun, of course. A bonus for people who believed in the game at an early stage, when it was not clear how events would develop, were free tickets to the first championship. A total of twenty thousand admission tickets were allocated, now the approximate cost per ticket is 0.13 ETH. Let it be a small compensation to them for the fact that the air was then 4 – 5 times more expensive than today.

Description of types and types of cards

There are four types of cards: Creatures, Spells, Weapons, and God cards. A typical card looks like this:

The number in the upper left corner indicates the amount of mana needed to use the card.

The cards that do not have yellow and green pearls are spells and weapons. The effect of a spell is activated immediately. Weapons are used by your god himself, and like all cards can be destroyed, otherwise they are active until the time specified on the card runs out.

Cards have unique casting predispositions, their own characteristics, let’s call it species.

Perhaps it is worth diving into a detailed description of each of them:

The process of developing the game

The Gods Unchained Roadmap is extremely concise. And if you thought that the yellow bar wasn’t visible just because of the limitations of my small monitor, you’re wrong, it’s empty.

Since November 29, more than a hundred adepts have been allowed into the beta, and they’re already making their decks, testing decks, thinking up invincible strategies, etc. Everyone else is encouraged to take some steps to get into the game as early as possible:

Many agree that the basic concept in both design and mechanics of the game is taken from HS. The developers changed the name of the abilities from hardstone, sometimes even leaving the same cost in mana, absolutely identical health and damage levels. To judge for this developers GU, we do not intend. Perhaps this was done on purpose to make it easier for the main target audience to switch from HearthStone to Gods Unchained.